You’ve heard the saying, “you win some, you lose some”? Well, welcome to the world of startups. Quite literally, there are instances where you make money and others where you lose it all. If you take the leap, you accept the risk that comes with investing in startups and early-stage businesses.

Startups need capital, a.k.a money, to grow and expand. Therefore, they need people to invest in them. Investing essentially means buying and then owning parts of a company. These “parts” are called shares. If the company does well, the shareholders can end up making money. This is because once the value of the company increases, the value of the shares also increases.

To encourage people to invest their money, the UK government implemented a scheme called the Enterprise Investment Scheme (EIS).

EIS is a scheme which offers tax relief opportunities when you invest in startups and early-stage businesses. As these younger companies can be a riskier investment, there are some incentives and also some protections in place for the investors in the form of tax relief and loss relief.

Why invest in an EIS-eligible company?

Why would you invest in a startup, you ask yourself? Although there’s risk involved, you’re able to potentially support a business you believe in right from the start, as it grows and develops. If the company you invested in succeeds, you’ll probably make some money. However, there can be instances where the startup fails or you end up selling your shares in the company at a loss.

With any investment you make, you have to make sure it’s the right financial decision for you. You won’t be able to predict what will happen (hello COVID-19👋 ) but if there is a case where the EIS company you invested in fails, you can claim EIS loss relief.

Once you’ve kept your shares in a trading company for 3 years from the date of issue, you’re eligible for the 30% income tax relief.

If you don’t keep the shares for at least 3 years and you still claim the income tax relief, it will be withdrawn by HMRC.

What is EIS loss relief?

EIS loss relief is a type of relief available when you sell your shares at a loss. This means that you sold your original shares for less than what you bought them for. Because you lost money from your investment in an EIS company, you’re eligible for tax relief. Tax relief allows you to reduce the amount of tax you pay the government.

In this case, you can offset the loss against your Income Tax bill. Another option is to do the same against your Capital Gains Tax (CGT) bill. It’s calculated by the tax band that you’re in and the amount of capital that was at risk.

The capital at risk is any capital after any relief you have previously claimed, such as the income tax relief. This amount is also called the effective cost. It should be noted that when you claim loss relief, you’re claiming a portion of the investment back, not the full amount.

How do I know if I can claim EIS loss relief?

To qualify for EIS loss relief, the initial value of the investment should be less than its effective cost when it’s sold. Effective cost is the total amount invested subtracted by the amount previously claimed in income tax relief.

The best way to wrap your head around the concept is by example, so your wish is our command.

Meera 💸 splashes her cash💸 so she invested £100,000 into an EIS company that she liked the sound of. She claimed back her income tax relief of 30%, so essentially, her investment is worth £70,000. This is the effective cost. Now the company isn’t doing well and Meera sells her investment at a loss for £50,000. The value of her investment now is less than the effective cost value. Meera is now eligible for loss relief on the £20,000 (£70,000 – £50,000), which she can offset against her Income Tax or her CGT bill.

As the rate you’re taxed is based on how much you earn, those that are in the higher and additional rate bands benefit more from claiming EIS loss relief against their Income Tax at 40% and 45% respectively.

You can also claim EIS loss relief against your current or future CGT bill. You can claim the relief this way by multiplying the amount of capital at risk (which does not include any relief you have received back)by the rate at which you pay CGT.

The rate is based on the type of asset and in this case, the assets are shares. The basic rate for shares is 10% and the higher rate is 20%. The rate that applies to you is based on your income, as shown below.

Which year does the loss relief apply?

When you make your loss claim, you can pick to deduct the loss from your taxable income at any of the below points:

If the loss is offset against CGT, you can claim:

How and where do I claim EIS loss relief?

Claiming your EIS loss relief is, luckily, a relatively simple process. You can claim your EIS loss relief as part of your Self Assessment tax return, by claiming the losses against either Income Tax or Capital Gains Tax. You need to fill in the SA108 form which accompanies the main SA100 form.

Specifically, you need to claim the EIS loss relief in the “Unlisted shares and securities” section, which is shown below. 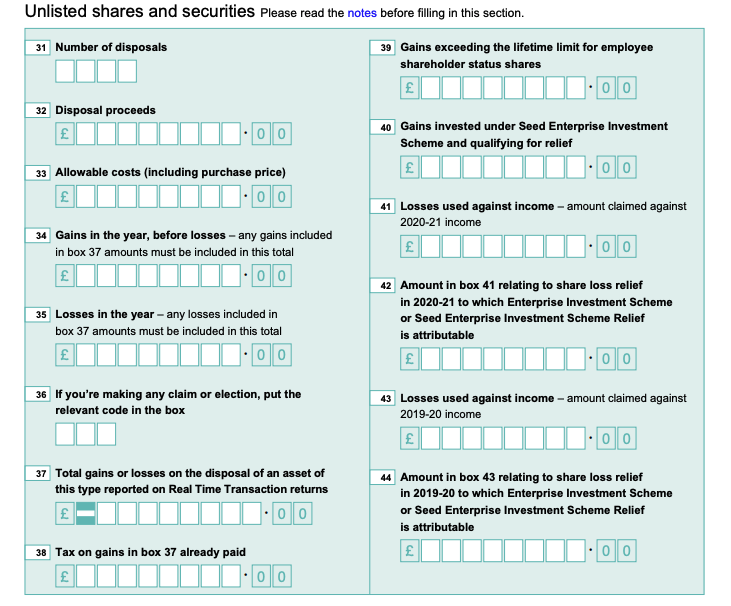 In your claim, you need to specify the source of the loss. You’ll also need to highlight the year of the loss and which years the loss should be applied to.

You must make the claim within a year after the 31st January deadline of the following tax year. For example, if the loss occurred in the 2020/2021 tax year, you would need to claim by 31st January 2023.

Well, of course! If you want to make your life easier, you can file your tax return with us, 100% online. Click here for stress-free tax returns!