If the government taxed wealth at the same rate as they do income, they could stand to raise up to £174 billion a year. But what does it actually mean to tax wealth?

According to Investopedia, “Wealth measures the value of all the assets of worth owned by a person, community, company, or country.”

When it comes to the wealth of a person, it’s not just your money that’s taken into account but your assets. This can be anything from your house or any property that you own to your car, the value of any shares you own, your furniture, your bonds, your paintings etc.

How do you calculate your wealth?

After counting your money and assets, debts like your mortgage, credit cards and loans should be removed to calculate your overall worth.

Why isn’t that fair?

This is why it gets complicated in terms of introducing a wealth tax.

If you’re asset-rich but cash-poor (i.e. your assets make you disproportionately more ‘wealthy’ than your income), paying tax on your overall worth could be a big hit financially. It could make it difficult to raise the cash to actually pay the tax.

Give us an example…

Let’s look at the example of Richard Branson. His £3.24 billion net worth is not his annual salary but a combination of all his assets and businesses added up. Here are some of the businesses that have made up Branson’s empire for the past 40 years:

Wealth tax models around the world

Today, there are only four countries in Europe that have a wealth tax: Switzerland, Norway, Spain and Belgium.

Back in the 1990s, there were more than a dozen countries that used it, but this has steadily decreased because of how it was enforced.

What was the biggest issue with enforcing the wealth tax?

One of the main issues was that there was little to prevent each country’s richest from moving their assets and money out of the country.

Essentially, the money can be moved to a country where there isn’t a wealth tax enforced, which would be counterproductive. 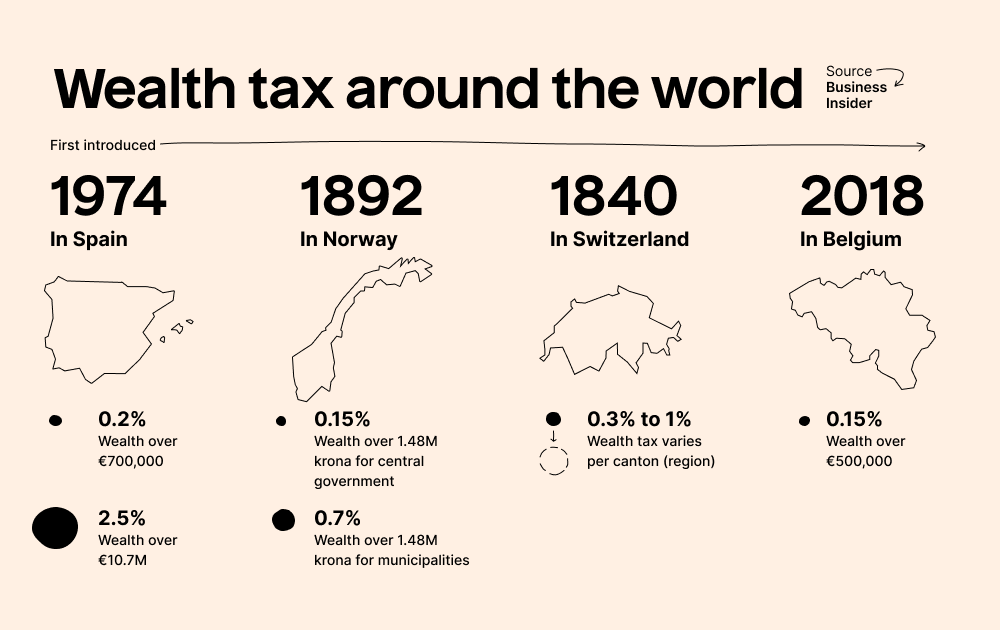 Is there a wealth tax in America?

There’s been debate in America amongst some Democrats about introducing a wealth tax to redistribute some of the country’s wealth – but it’s not progressed beyond debate at this stage.

What could a wealth tax mean in the UK?

Lower income families have been affected the most. Because wealth is taxed at such a low rate, the wealthy in the UK are getting wealthier but council tax, VAT, the BBC licence fee and duties on alcohol and tobacco hit those on the lowest income the hardest.

What could be next?

Whilst a strict wealth tax in the UK has not yet been proposed, a few suggestions have been made to simulate it: