For any of us that needs to do a tax return, you’ll know that one of the important parts of the process is claiming back your business expenses.

If you’ve bought a laptop, for example, or an office chair or even a coffee over a client meeting, you can claim these costs back and reduce the tax that you pay on your profits.

HMRC are lenient in what they’re willing to accept as a business expense. But many have used this inch to take a country mile.

Back in May 2009, chaos erupted at Westminster as The Telegraph reported the hoards of MPs claiming outlandish and pricey expenses. The scandal was at full pelt for around five weeks and saw five MPs and two peers jailed in the aftermath.

It all started in 2005 when two journalists put in Freedom of Information requests for MPs expenses. In the same year, the Freedom of information Act (2000) came into force, enabling us to access recorded information held by public authorities. These requests were rejected twice and prompted a legal battle that lasted three years before a High Court judge ruled in favour of the journalists.

In 2008, there was a scramble to redact the information, but all in vain as a hard disk (remember the noughties?) containing a reported two metres-worth of receipts was sent to a number of news outlets. The Telegraph were the first to publish the leaked documents which revealed myriads of expenses claimed with taxpayer money.

HMRC: they’ve seen it all

Although less outrageous, it’s not just MPs who are guilty of claiming dubious expenses. Lots of us try to slide weird and wonderful “business” purchases under the Self Assessment carpet.

Here are 5 claims that HMRC has rejected as allowable expenses:

Don’t get too comfortable, there’s more

And it doesn’t end there. It’s not only strange expenses that we flaunt but reasons for not completing our Self Assessments in time.

Take a look at these actual excuses that HMRC compiled from the 2017/18 tax year: 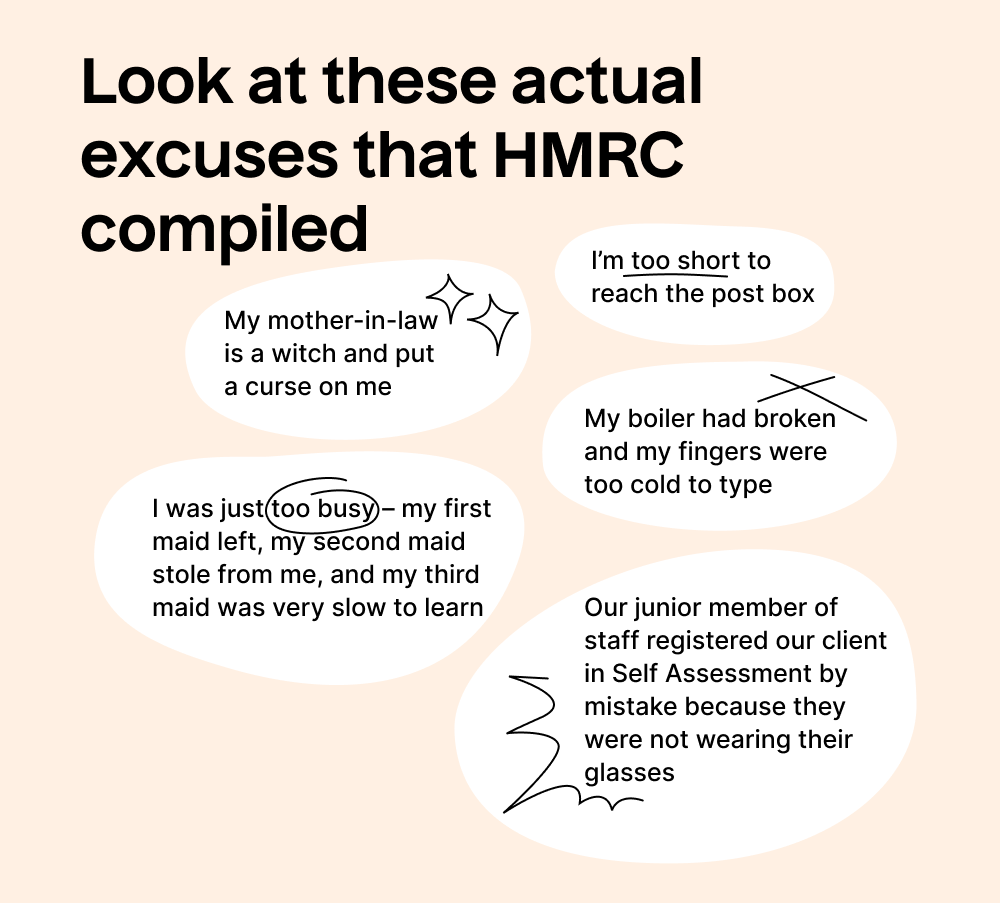 How do expenses work?

All is not lost. You don’t have to file your tax return in fear that your expenses will be publicly ridiculed or smeared across the media. What’s really important is to keep a record of all that you’ve spent. And you should do this from the start of the tax year so you know exactly what to deduct.

For a full guide on what you can expense for your business, here are our top tips.