It’s been a long old road. Back in March 2020, Chancellor Rishi Sunak promised to scrap the increasingly controversial tampon tax in the UK. He said that it would come to an end by the end of the year. Then in 2021, we became tampon-surcharge-free and no longer considered menstrual sanitary products as “luxury items”.

What was the tampon tax?

The tampon tax was introduced in 1973. It goes without saying that those responsible did not menstruate. The tax added VAT to menstrual sanitary products, classing them as luxury items. Before gasping in horror, it’s important to understand how the VAT (Value Added Tax) system works in the UK. At its most basic, VAT is a business tax paid for by a consumer. 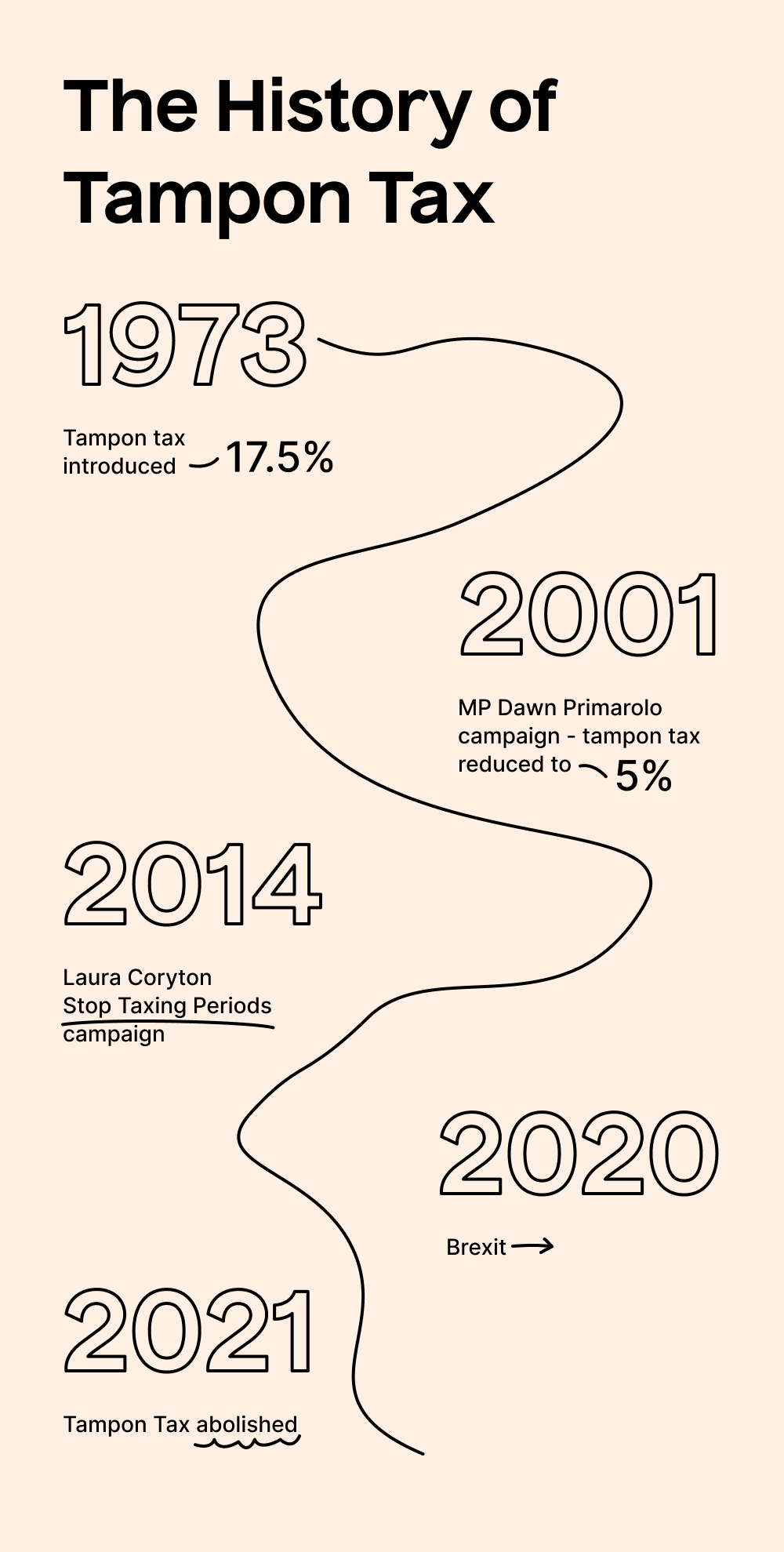 When you buy most goods and services, a standard VAT rate of 20% is added. You won’t have noticed it when you shop because, in the UK, it’s inclusive in the cost of an item. In other countries around the world, it’s added at the till when you pay.

Some items are charged at a reduced VAT rate of 5%. Examples of these are:

As you can see, some services are more luxurious than others.

The tampon tax began life at an eye-watering 17.5% (which was the standard rate of VAT at the time). But it was later reduced to 5% in 2001, after significant campaigning efforts by MP Dawn Primarolo. Since then, it’s stayed at 5% despite numerous campaigns to have the tax abolished completely. Notably was student (at the time) Laura Coryton’s Stop Taxing Periods campaign in 2014.

Real talk: what are we saving?

OK, the abolition of tampon tax is not saving people who menstruate a whole lot of cash. In fact, it’s been estimated to save you just £40 over your lifetime. You’ll save 7p on a pack of 20 and 5p on a pack of 12 sanitary towels.

However, this is not the point. It’s a triumph of principle – and for those who can’t afford menstrual products, the abolition goes some way towards tackling period poverty.

Period poverty is the term used when someone can’t access menstrual products as a result of financial difficulties.

In the UK, 1 in 10 girls (of 1,000 14-21 year olds surveyed) can’t afford menstrual products. 1 in 7 struggle to afford them. As a result, many young people are missing school and incurring regular gaps in their education.

As many as 40% of girls said that they’d used toilet roll because they couldn’t afford menstrual products, and 68% felt that the lack of products affected their concentration at school.

The government will continue to roll out their 2020 scheme of providing free menstrual products in state schools and colleges, and NHS hospitals will continue to provide free products to any patients who need them.

Wait, does that make us pioneers?

In the UK? No. Far from it. The UK are actually quite late to the party. Here are 18 countries around the world that have abolished the tax:

So, we’re late to the party. Yes. But at least we’re here now!