What if instead of throwing the one ring into the fires of Mount Doom, Frodo decided to cash in and treat it as a gift from his uncle. The only thing is, being the most powerful of all rings and all, and being forged by the Dark Lord Sauron himself, it had a hefty price tag. Especially if he cashed it in by selling it back to Sauron. Then it was worth, what, the value of ruling supreme over Middle Earth? Incalculable.

Unfortunately, Bilbo passes away soon after Frodo takes off with the ring. Without its powers to help him live his best life, his time comes earlier than expected.

Even more unfortunately for Frodo, Bilbo leaves him his house in The Shire. Combined with the value of the ring, he now owes Inheritance Tax. And a lot of it. He has 6 months to cough up 40% of Bilbo’s estate that’s worth way more than £325,000 – the maximum you can accept as a gift tax-free within a given tax year.

The HMRC was coming.

Surely it’s fine. Someone that considered a perilous journey all the way to Mordor could manage a tiny task like a tax return, right?

“It is a strange fate that we should suffer so much fear and doubt over so small a thing,” Boromir said.

Exactly, Frodo thinks, although he’s not certain where he came from. Frodo heads straight for the government gateway to start the process of his Self Assessment.

When he gets to the Overview page, he’s surprised by the volume of hyperlinks that seem to divert him from where he needs to be. Curious, he thinks. He navigates down to Deadlines under which are three options:

Hmm, he thinks and clicks, Not self-employed, although he isn’t sure that any accurately describes his status as a hobbit. He is the chosen one, after all.

He clicks Register Now, but when the page loads, he’s confronted by a selection of forms.

Boromir laughs from behind him. “Frodo, one does not simply walk into the government gateway.”

“Urgh, be quiet, Boromir,” he says, and closes the tab.

It’s at this point that Frodo realises that he hasn’t even checked whether what he needs to do is a Self Assessment. He returns to Google. “My old friend,” he thinks to himself, the words of his uncle haunting him.

He types in, Inheritance Tax (IHT) and is directed back to gov.uk. He sighs, frustrated by the time wastage, but clicks on it anyway. 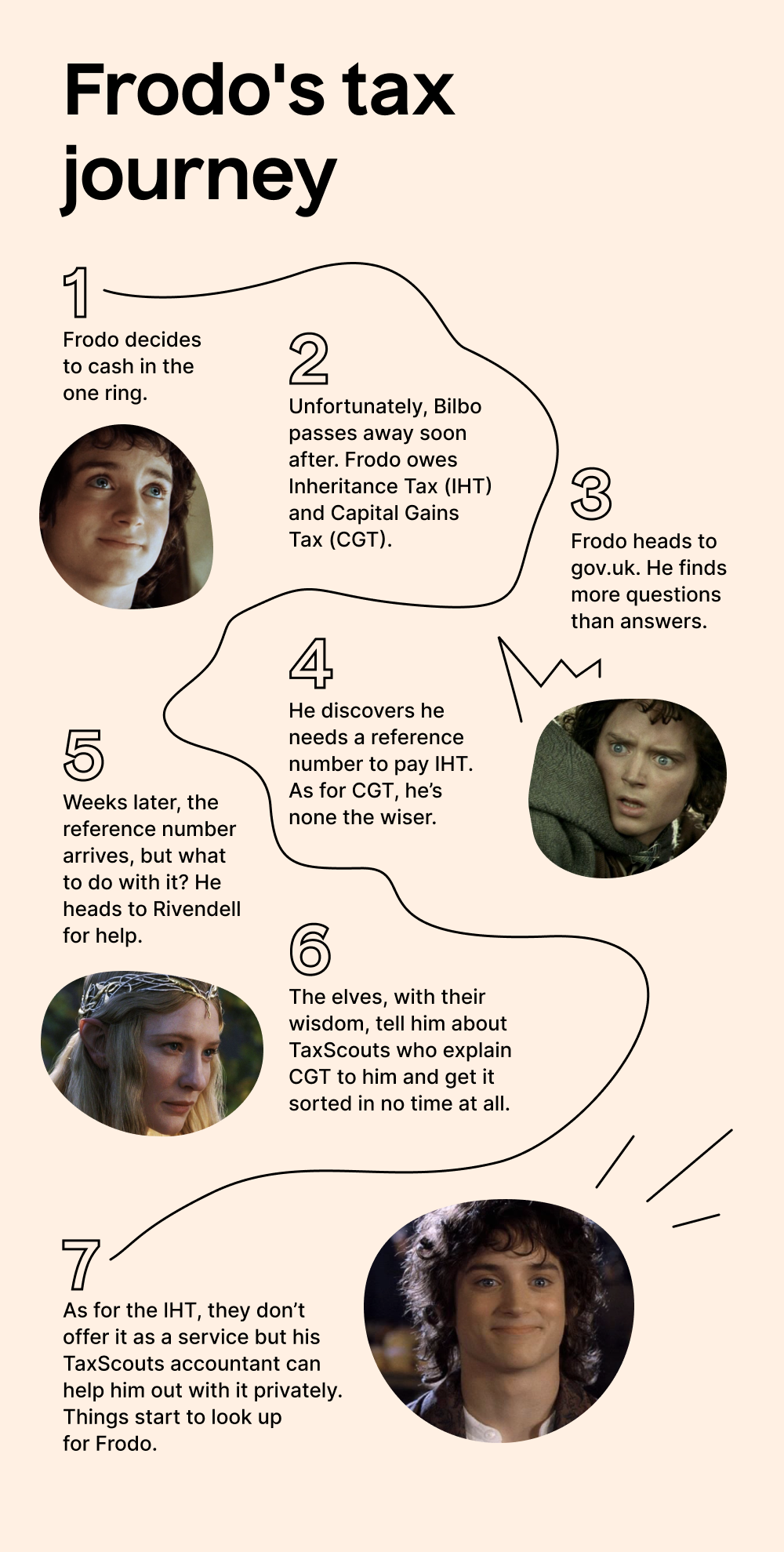 But he agrees. He starts to wish that he’d just chucked the ring into the fires of Mount Doom after all.

The payment reference number arrives by post, but Frodo can’t even pretend to be relieved. He’s had time to think about things and a few concerns have come to his attention:

Cross and dejected, Frodo accepts that he needs help. He journeys to a land far, far away (ok, it’s Rivendell) and consults with the elves who tell him of a mystical force called TaxScouts. As it happens, they’re 100% online so he could have saved himself the journey, but he tries not to focus on the negatives.

For just £149, they link him with a friendly, expert accountant who explains all he needs to know about the Inheritance Tax and Capital Gains Tax implications of his sale of the one ring. Unfortunately, TaxScouts don’t deal with Inheritance Tax themselves, but they point him in the direction of the Inheritance Tax Probate Helpline.

When it comes to the Capital Gains Tax, TaxScouts help him complete his tax return in just a few days, asking for no more than some documents and information about Bilbo’s estate/the sale to Sauron in return.

“I would rather spend one lifetime with you, than face all the ages of this world alone,” Frodo says to his accountant once the return is filed and completed.

He quickly regrets this declaration. Maybe it was too much. He’s just so grateful!

“No worries,” the accountant says.

Frodo wonders whether it was a mistake to sell the ring back to Sauron, condemning Middle Earth to a tyranny of fear and conflict for the sake of his own riches…

…but that’s a story for another day.