At the end of last year – 2020 – we sat down with founder Lara from Found & Flourish. They’re one of our latest marvellous partners. And being pioneers in empowering female business owners, we were excited to get a closer look into their community.

Lara, having first gone freelance herself a few years ago, told us about the reality behind taking the plunge. It’s not all liberation and lattes. She talked to us about the isolation and education gap that can come when you first go self-employed. And, of course, the inevitable tax dread, confusion and procrastination.

Scroll down for the whole shebang!

Found & Flourish is a female founders media, community and events platform. We launched in September 2018, with the aim to empower women in business to found and flourish. We do that by providing resources, support, inspiring and educational events, and a community of like-minded women that our members can tap into any time.

It’s really like the power of collective wisdom, if you will.

A bit about you

I live by the sea so I love running on the seafront. I’ve also got more into reading this year, thanks to our monthly book club. Three books that I’ve really enjoyed have been:

I unfortunately haven’t been able to see any family, which is something that I usually do a lot of as I’m one of 6 children. But I’ve been keeping busy with books, hanging out with my son who’s 3, getting outdoors and walking a lot etc. I know that sounds quite boring!

The leap of faith

I’ve always worked in really male-dominated environments: in the media industry working in web design, in a media agency, and then before I left I was working in advertising. But it was only when I got to the point of burnout in this really toxic environment that I decided to take the leap and do something that was really meaningful. That was something that I hadn’t felt like I’d done before.

I guess I wanted to create a space that I needed when I was still working in media. I’d had all these ideas of starting a business; I just didn’t have the means, support or resources to do it. I’m also one of four girls so I have an affinity to girl power and supporting women. For me it’s all about connection, collaboration and community.

We have a gender pay gap, an opportunity gap, and an ethnicity gap. There’s so much work that needs to be done. As a mother and self-employed business owner, I know first-hand the struggles. As women, we often take on the carer responsibility in the home and we’re usually paid less as well. There’s also a lot to be said about the decision makers in government – there’s still a lack of support I think.

For me, it’s really important to provide support, solidarity, and a space where women feel heard and understood. We, ourselves, can’t solve the problem of expensive childcare and policies that don’t support us. But what we can do is provide incubators where women feel cheerleaded and empowered to take leaps of faith in spite of everything else that’s backed up against us.

I  want to provide the best resources possible to support women so that they don’t feel like they have to get themselves into financial difficulty.

When I set up my business, I was fronting childcare and general living costs – and it was such a struggle. Having gone through that, I  want to provide the best resources possible to support women so that they don’t feel like they have to get themselves into financial difficulty. I want them to be able to build their dream business in an environment that supports them, so they’re not feeling isolated, under-resourced or alone.

Transparency is key. One of the biggest problems, especially in employed situations, is that people don’t know what they’re being paid compared to their peers. They don’t have the knowledge (and therefore the power) to say I deserve more. It shouldn’t be about what everyone else is being paid, of course, but it gives you that benchmark.

As a self-employed person, having your own community of women who you can talk to and ask openly about what they charge for different things is so useful. Really knowing your worth can be tricky – and a lot of people say that they struggle with it. Even if you, say, keep a folder of the positive feedback that you get from people, this can be a constant reminder and re-affirmation that you’re good at what you do and that you deserve to charge your worth.

One of the biggest problems, especially in employed situations, is that people don’t know what they’re being paid compared to their peers.

We’re used to under-charging and under-valuing our skills and our time, and a lot of us end up charging per hour. But really, what you should do is look at the value you’re providing and charge per project. The better you become and the more experience you gain, the higher your value, and this needs to reflect in your rates.

If you want to get really practical, you can work backwards. You work out what you need to charge to be able to afford the life you want:

Someone once said to me, decide your day rate and then add 20%. I think that’s really good advice. It’s better to start high and negotiate down than to start low and constantly feel like you’re undercharging and being undervalued. 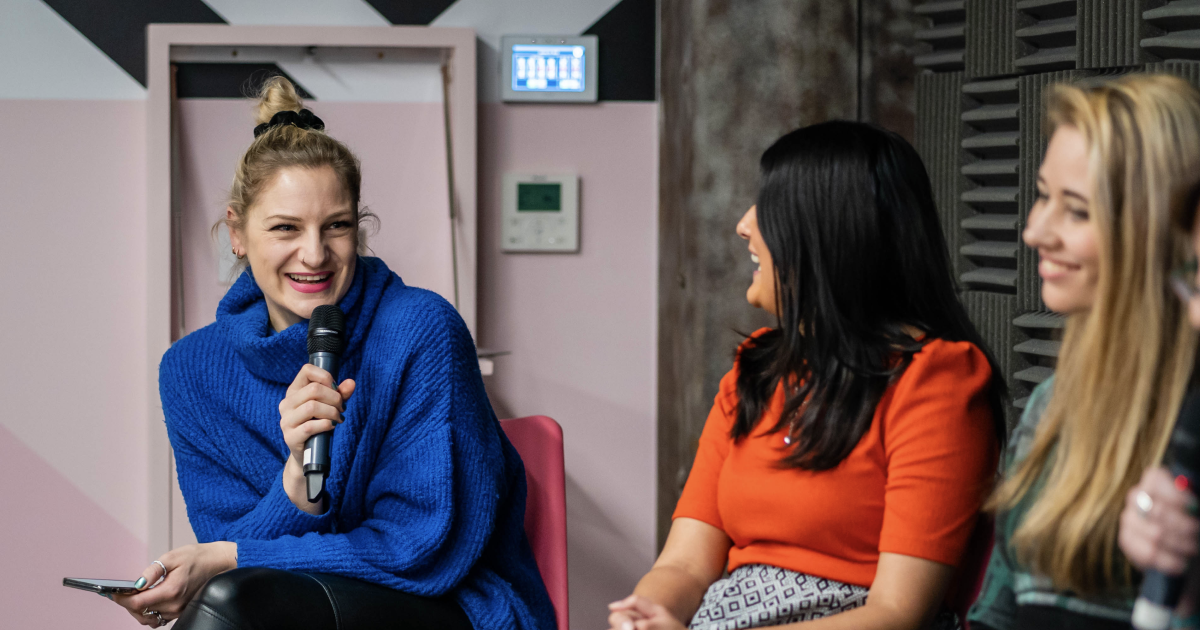 I was self-taught; I didn’t have a clue what I was doing. So I spent hours putting my website together, working out how to navigate the backend, working out what to charge etc. And if I didn’t know something, I assumed that I was a failure and that I wasn’t good at what I did. At the beginning, it was isolating, it was lonely, and I was constantly second guessing myself.

If I’d had a community or a support network, I could have messaged them to ask what things meant or what they’d do in the situation. I take for granted now how fortunate I am. I’m surrounded by hundreds of women who I could quickly drop a message to. That’s what I’m really trying to do with Found & Flourish. It’s not just for people who are building and growing their business; it’s also for people who are right at the beginning of their journey. Those who are wondering how to put the first steps into motion to bring their ideas to life.

Tax – a lack of education

I definitely didn’t put enough aside for my first tax bill. Again, it was that lack of knowledge and lack of understanding. At the time, I was using an accountancy platform. But it wasn’t like having an accountant who might have your best interests at heart. So suddenly, this tax bill came. It wasn’t a huge amount in my first year but it was enough to make me think that I wasn’t prepared for it. I think that it can be quite overwhelming – it’s something that people often leave to the very last minute.

It’s so important that you’ve invested either time or money (or both) into an accountant or a platform for support.

There’s not a huge amount of education around it in general, which is why we’ve partnered with TaxScouts. We’re really looking forward to our session in January. That will give our members enough time to get their Self Assessments done. It can be daunting, especially as HMRC don’t make it very easy to understand.  It’s so important that you’ve invested either time or money (or both) into an accountant or a platform for support around this. That way, you can avoid finding yourself in a situation where the tax bill comes and you weren’t prepared for it.